Home Soundcloud Hitler still doesn’t get it. Speaking in a normal voice about der untergang “a very great danger, perhaps the gravest one”

Hitler still doesn’t get it. Speaking in a normal voice about der untergang “a very great danger, perhaps the gravest one”

Hitler still doesn’t get it

June 22 1941 Hitler unleashed with operation Barbarossa his Blitz Krieg on Russia. A year later in 1942 he went to  Finland for a talk with Carl Gustaf Emil Mannheim. Germany was bogging down in Russia. So he needed al the help he could get. In this secret recording het talks to Mannheim about the Russian campaign. Hitler still doesn’t get it that he actually let the second Word War. 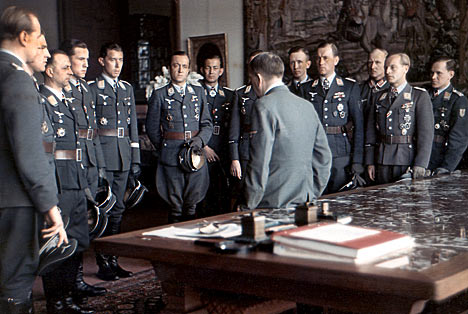 Unidentified (Hitler?): “…a very great danger, perhaps the gravest one…”

Hitler: “(unintelligible)…we ourselves were not completely sure of this, how monstrous this strong armament was.”

Hitler: “35.000 Panzer (now he uses the word ‘Panzer’)…we have more than, we have at the time more than 34 Pan…thousand Panzer destroyed. If somebody had told me this to…had said: you…if one general of mine had declared, that a state here had 35.000 tanks, I had said, Mister (‘Mein Herr’), you are seeing everything double… or tenfold, this is crazy, you are seeing ghosts…I had not thought this possible…If somebody had told me that…I have told this just before, we have found industrial plants…one of this in (unintelligible: Kalanuskaja?) for example, that was under construction two years ago…and we had no idea…and today there is a tank production facility that…that…in the first shift a bit over 30.000 and in full development should have employed more than 60.000 workers…one single tank production facility…we have occupied it…a gargantuan facility…lots of workers who nevertheless live like animals and such…”

Another Unidentified (Hitler?): “An amazing region…”

Mannerheim: “If one considers that they had for 20 years…more than 20 years…25 years nearly, the freedom to arm themselves…and expended all, all for armament…only armament…”